The Baptistery, in many ancient cathedrals and churches, is generally separated from the main church. The separation of the two places originated in the first centuries of the Christian era, when those not yet baptized were not admitted to the Eucharistic celebrations that took place in consecrated places of worship. This dislocation enables us to understand the particular meaning of Christian baptism, which is a passage from darkness to light, from sin to grace, from death to life.

If Jesus underwent baptism (albeit the penitential baptism of John the Baptist) and recommended the apostles to “baptize all peoples,” it is particularly St. Paul who founded the “theology of baptism “, when he writes in the letter to the Romans:

So by our baptism into his death we were buried with him, so that as Christ was raised from the dead by the Father’s glorious power, we too should begin living a new life. (6: 3-4).

And the evangelist John will add that in order to enter the kingdom of God, we must “be reborn “ to a new life, which is given to us precisely through water and the Holy Spirit in the baptismal event. This passage, from the old life to the new life, became significant thanks to the short journey that, during the night of the Easter vigil, the newly baptized made from the baptistery to the church, to participate in the Eucharist, “source and summit of the Christian life,” as the document on the liturgy of the Second Vatican Council defines it. (CCC1324)

The Altars of the Baptistery

Altar of Our Lady of Sorrows

Left of the entrance 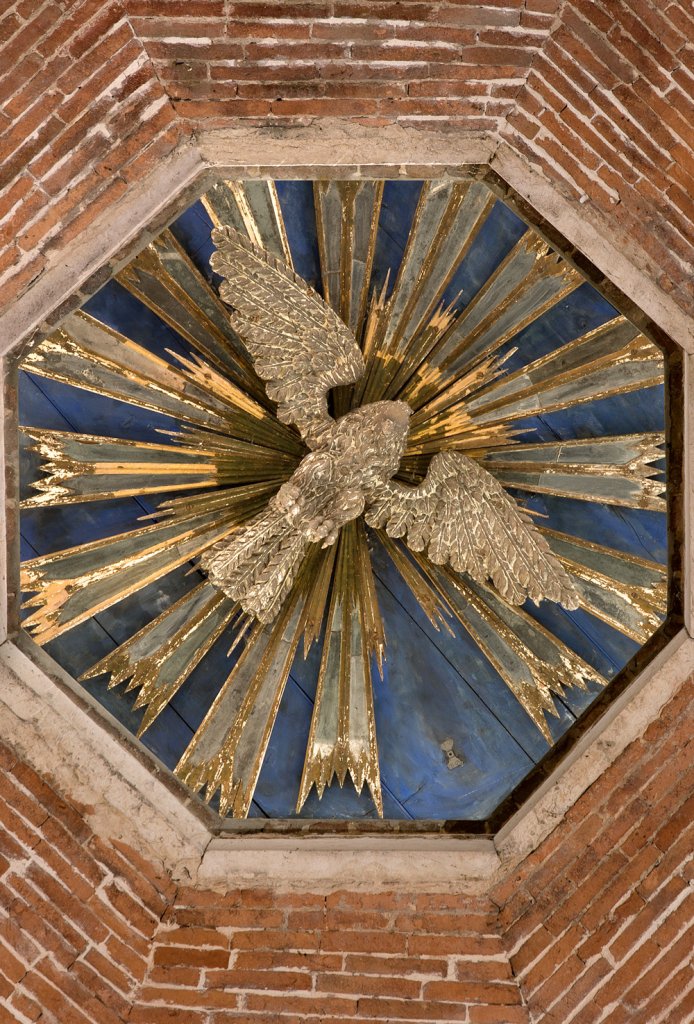 Dedicated to St. John the Baptist, the interior of the Baptistery has walls divided into three overlapping sections with as many frames and blind arches. A succession of three arches on columns and stone capitals characterizes the lower part, surmounted by two bands with galleries, opened with three mullioned windows each, above which the wide basin of the dome is set. The latter, 16 meters high, which, on a technical level, predates the dome of the Cathedral of Florence by Brunelleschi by a couple of centuries, concludes at the top with an octagonal lantern: a cusp on which the bronze statue of an Angel with a halo is placed (on which is engraved the name S. Gabriele) which holds a processional cross of gilded copper dating back to the XII-XIII century, now replaced on the exterior by a copy. 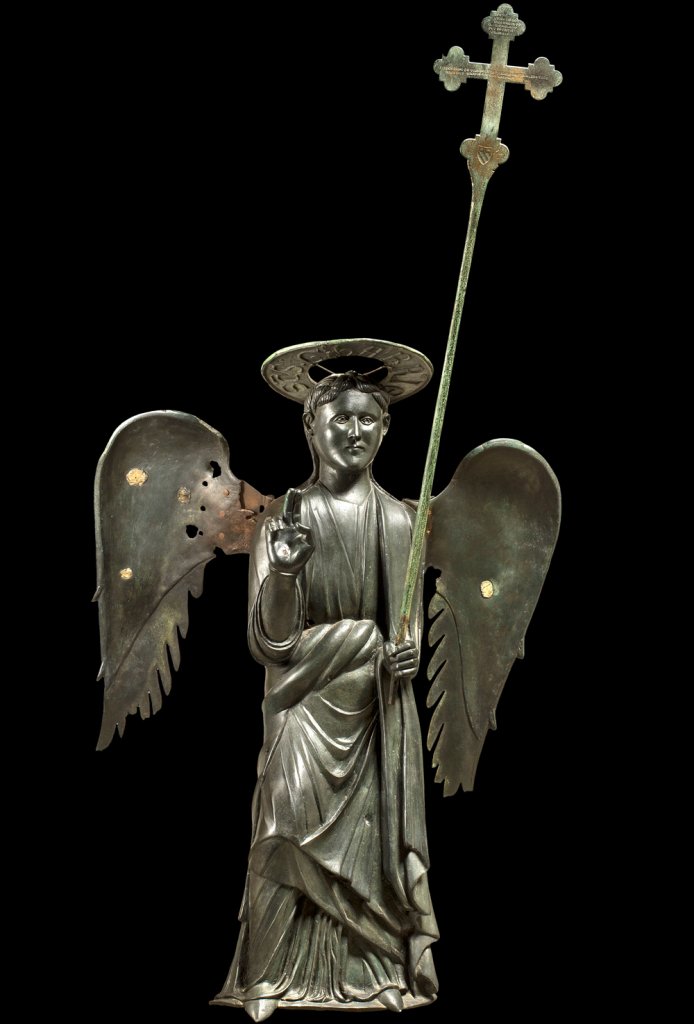 Light filters into the baptistery by means of the double series of mullioned windows of the galleries and by a lamp located on the top of the dome.

At the center stands the Baptismal Font (1520-1531): the large octagonal cistern is a monolithic block of red marble from the quarries of Sant’Ambrogio in Valpolicella (Verona) and is placed on a marble base. Its construction was entrusted to Lorenzo Trotti, who completed it between 1520 and 1531; while Janello Torriani was commissioned to mount the gilded bronze doors in 1534.

It is not a real baptismal font, rather a basin in which the water, blessed by the Bishop during the Easter vigil, was kept to administer baptisms throughout the year. Each façade of the polyhedron, divided into three sections, bears some inscriptions with the date of construction and the name of the builders of the time. Atop is a wooden statue depicting the risen Christ, with an obvious symbolic meaning that links Easter to Baptism. 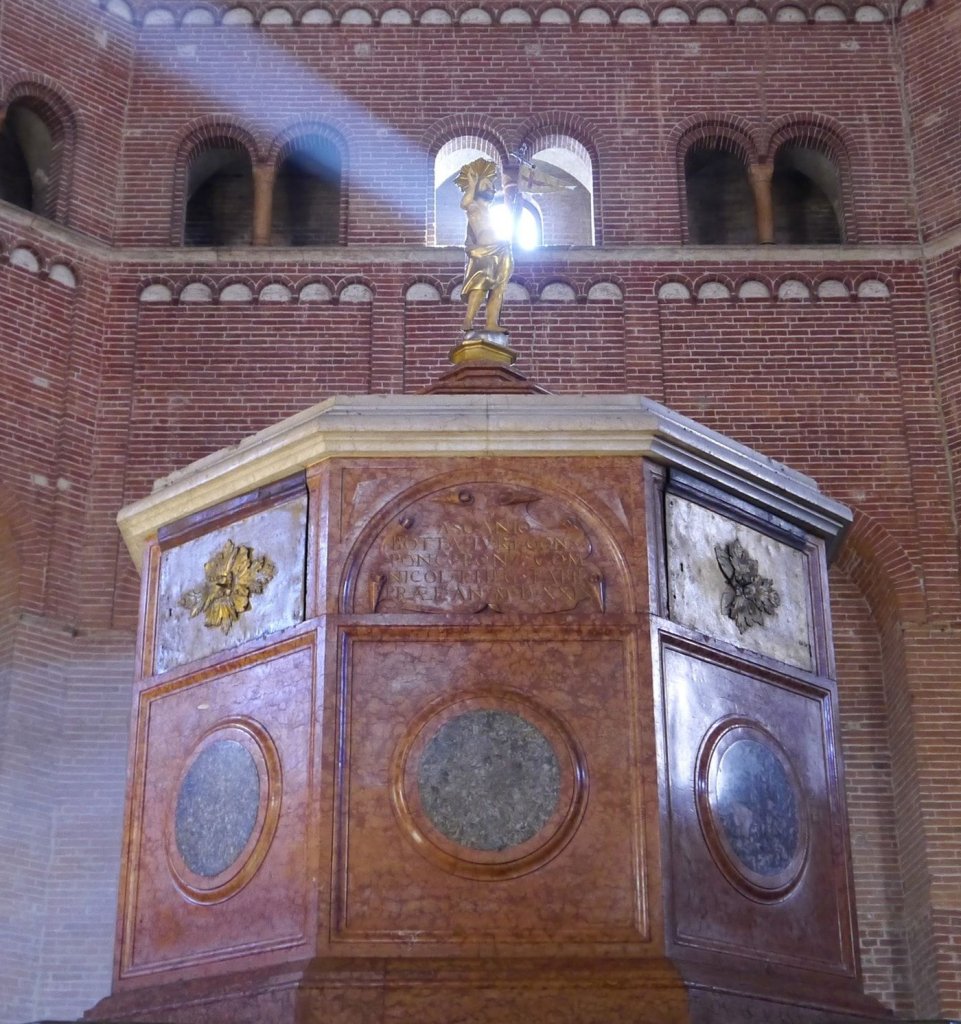 Noteworthy works are found in the three altars of the Crucifix, of the Addolorata, and of San Biagio.

Precisely on the wall opposite the entrance stands the imposing fourteenth-century crucifix transferred here from the Cathedral, where it remained suspended above the main altar until 1506, the beginning of Boccaccino’s work in the apse, later to be shelved for several years, first in the cathedral and then in baptistery. It will be a confraternity established in 1691 that increasingly promotes its devotion, restoring dignity to the work by having the back of the great cross frescoed with a depiction of the Virgin, St. John the Evangelist and Mary Magdalene, at the beginning of the eighteenth century.

Always due to the fervent activity of the confraternity, the Crucifix of the altar of the sorrowful Virgin is renewed in 1597, with which they intended to further promote devotion to the Cross with a particular attention to the theme of the Passion. Having dismantled the old altar built by Francesco Dattaro in 1558, the on master wood sculptor from Cremona Giacomo Bertesi is entrusted with the construction of the new complex, which like the altar-piece already constructed in San Marcellino, proposed a rich frame of carved gilded foliage to crown of the statue of the Virgin, immediately the object of great devotion. 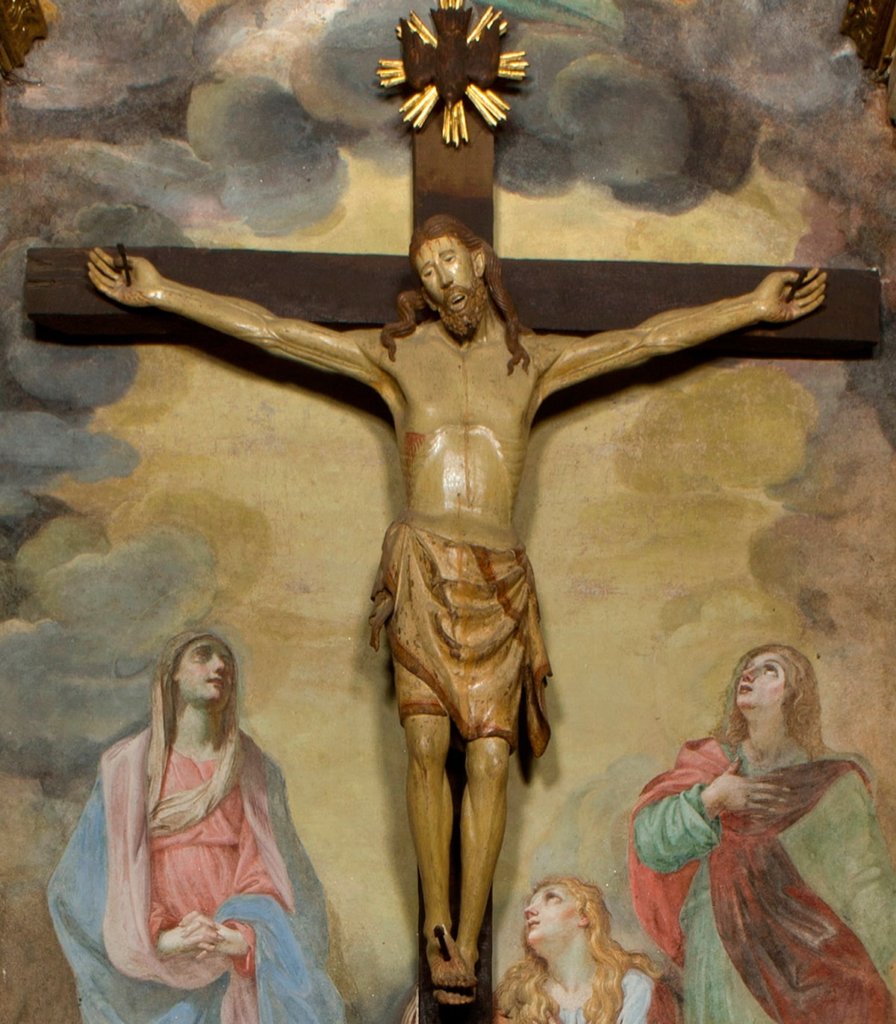 Altar of the Crucifix

To the Università dei Battilana (Wool Carders University) – established in 1510 and having selected the Baptistery as its headquarters – is credited the altar of San Biagio (St. Blaise), their protector thanks to the similarity between the instrument with which the saint was martyred and the comb used for carding wool.

In a climate of great rivalry with the Confraternity of the Crucifix, the altar is completely renovated at the end of the 17th century, preserving only the statue of the Saint dated from the last decades of the 16th century.

The large carved and gilded altarpiece, made by an anonymous local artist, was executed between 1699 and 1700 and remains one of the most important examples of Baroque wooden sculpture in the Cremona area.

At the top is a painting depicting the Madonna and Child, by Carlo Picenardi junior in 1682. 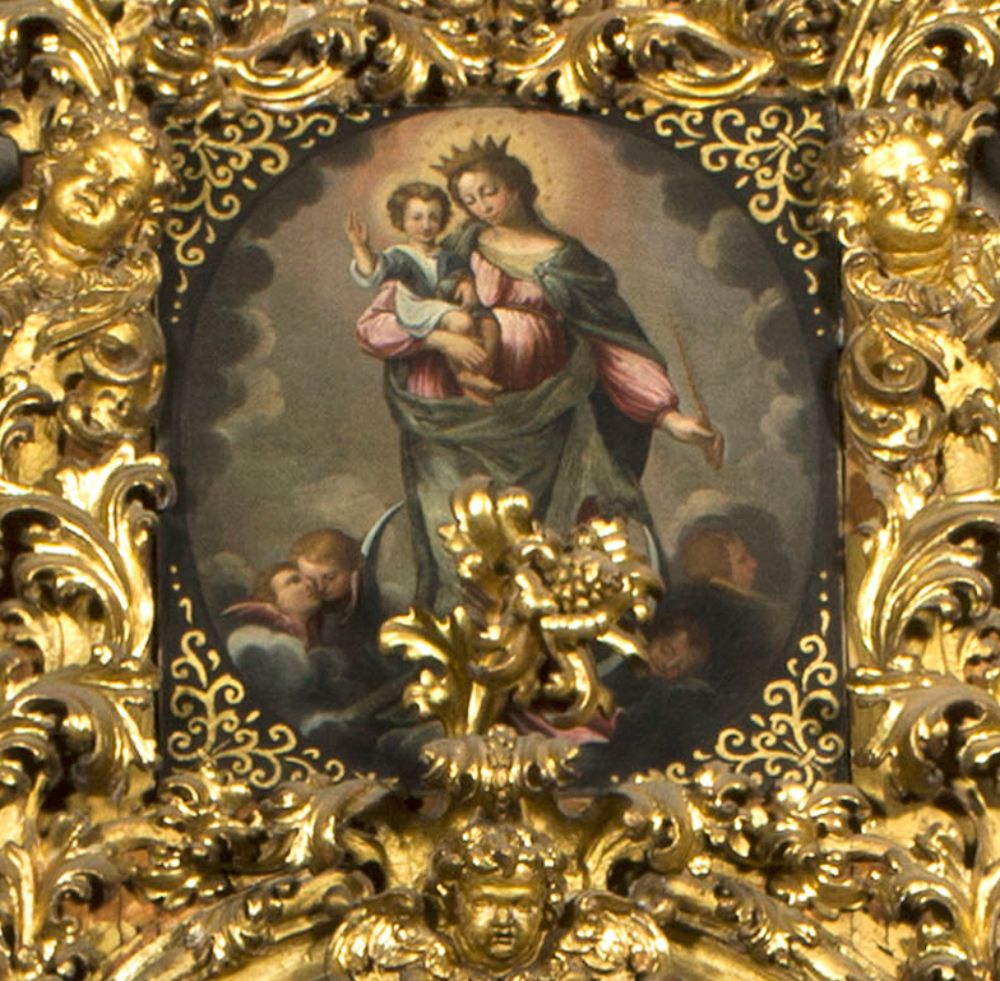 Right from the entrance

The mosaic fragments of the Torrazzo courtyard, dating to the second half of the 4th century, were placed in the building: they stand out for the elegance of the compositional design, characterized by a series of octagons connected to squares using a two-ribbon braid and enriched with decorative motifs, including black ivy leaves, pink flower buds, decorative leaves and Solomon’s knots.

The two bronze pegs with lion protomes of the early twelfth century (now in Palazzo Vescovile) constituted the original decorative elements of the Baptistery, consonant with the production of north Italian metal, whose formal references to the mosan tradition are not unreasonable. 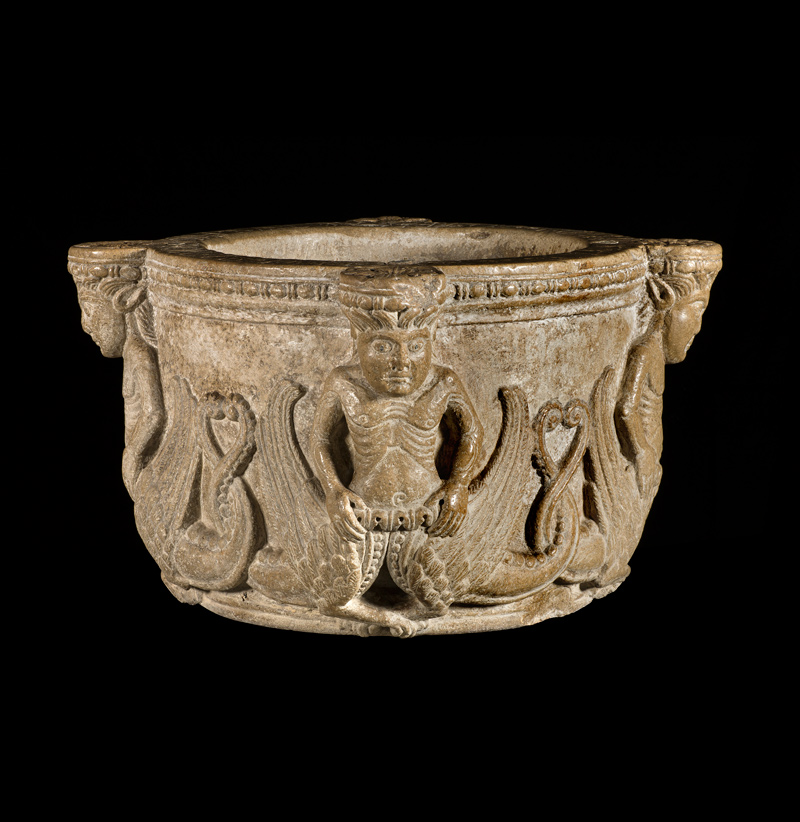 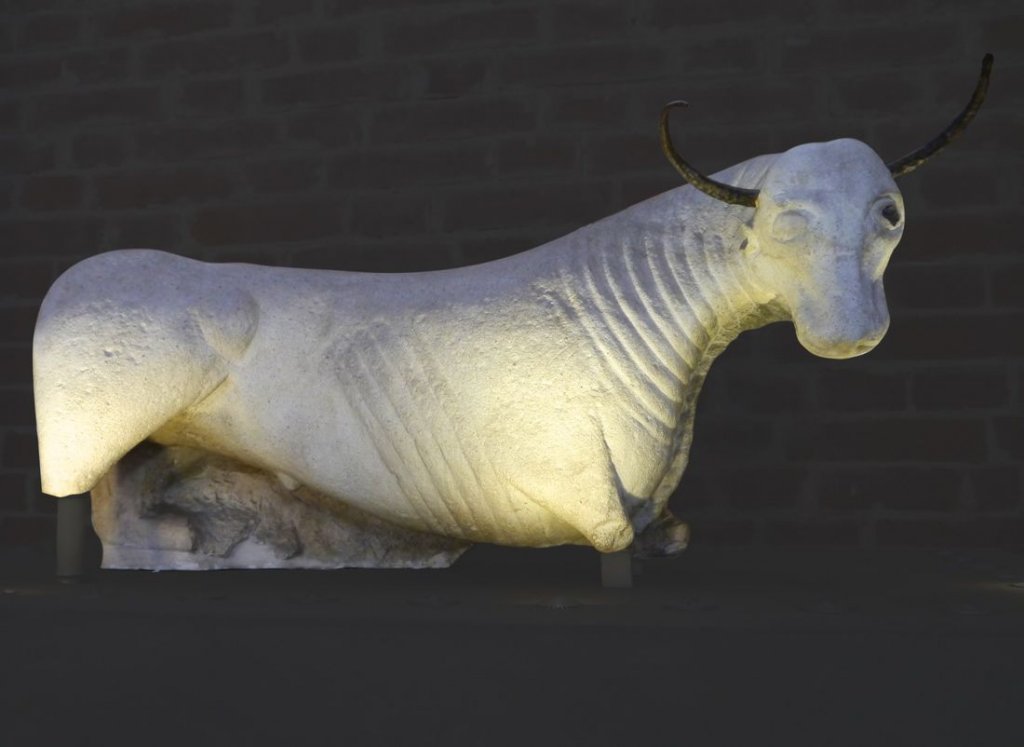 Visits to the Baptistery

School groups on an educational trip, groups of more than 15 people, seniors over 65, Welcome Card holders 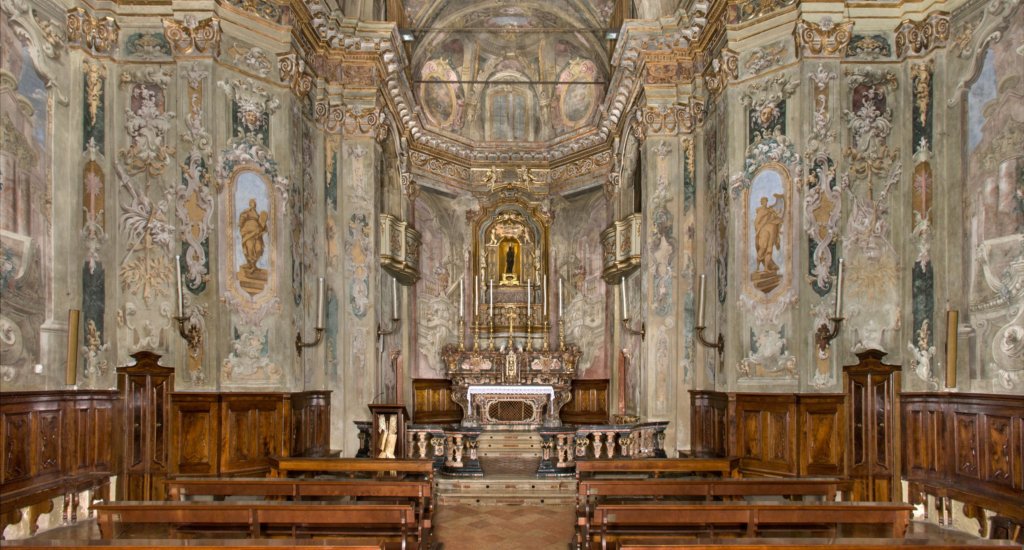 Visit the other interiors